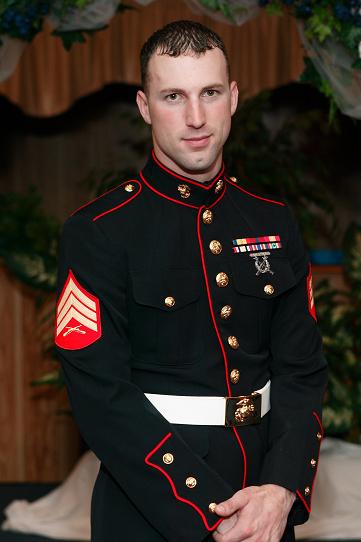 USMC Sergeant Kenneth B. May, Jr.

Today, on this Memorial Day, 2016, we pause to remember a hometown hero, United States Marine Corps Sergeant Kenneth B. May, Jr.

Sergeant May enlisted in the Marine Corps in 2005 and was on his third combat deployment when he was Killed In Action. His death came one day after his second wedding anniversary.

Corporal Johnson, who enlisted in 2007, was on his second deployment.

At the memorial service for Sergeant Kenneth May Jr., the musical selections included “Nothing Else Matters” by the metal band Metallica. It might be an usual choice for some, but not for the avid musician and guitarist.

“Only Kenny would have metal playing at his funeral and at his wedding,” said Mike Brooks, the pastor of a church in San Clemente, Calif., near where Sergeant May was based at Camp Pendleton. “I know he’s smiling about all this.”

Sergeant May was married to Krystal Barton, who marked their second wedding anniversary the day before her husband’s death.

He graduated in 2004 from Kilgore College, where he was in an international academic honor society and put his musical talents to use in the marching band and the chorale, a school spokesman said. Sergeant May also enjoyed gaming and working with firearms.

The Rev. John Gradberg said Sergeant May was a man of faith and humility, who would have told mourners to “save this accolade for a real hero.”

Survivors include his wife; his parents, Kenneth and Karen May; and a sister.

I was privileged to attend Sergeant May’s funeral in Kilgore, Texas, as part of the East Texas Patriot Guard Riders, and stand the Flag Line honoring Sergeant May. May he Rest in Peace, and his family be comforted in their loss.

The preceding information was provided by the Associated Press and KLTV, Channel 7.